I am part of a group on Facebook that is filled with fellow gameschoolers. It’s a great place to learn about different games and find out what might be the best game for a particular topic or age. The group is also an enabling site, making me feel like I need to own all the games. (That does not go over well with Halo42.)

One of the games that I have had on my list for awhile is Castle Panic by Fireside Games. It’s a cooperative game, and I thought it would be a great way to practice strategy gaming, without a huge stress of being the individual winner. Instead, either everyone wins, or everyone loses. Not everyone likes that idea, but it’s worked out pretty well for us.

Last year at Gen Con we were able to try out the My First Castle Panic. It’s a much simpler version of the game, but T really enjoyed it. I had debated getting it, but I figured he’d be ready for more of a challenge soon. I was right. I’ve seen there is an expansion, so I’m going to have to look into it at one of the conventions this year. (I know we are going to Gen Con; Origins is up in the air since I was not granted a press pass.)

The goal of the game is to kill all of the attacking monsters before they storm and destroy the castle and it’s walls. You work together to get rid of the monsters (orcs, trolls, goblins, and the powerful troll mages.) The game starts with 3 random monsters in random zones, advancing toward the castle. It is the current player’s goal to either eliminate, lower the health or knock back those monsters. All of the players have 5 cards in their hand, and there is the option to trade with the current player to help in the attack. After the player has done what can be completed, all monsters advance one spot and 3 more monsters are added. This continues until all monsters have been defeated or the monsters have taken over the castle.

I really like the strategy involved in this game, and I like how it forces us to think of others, not just our own moves. The game takes roughly an hour to play. We’ve played with 2, 3 and 5 players. My favorite was the 5 player version, but the 2 player version is just as fun, just a little more stress. 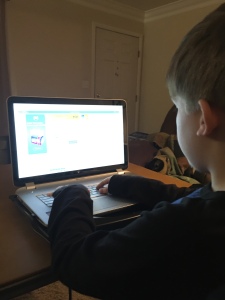 As part of T’s schoolwork, we have started with learning computers, typing, documents and how to post to the web, amongst other things. We’ve started to post his reviews, left as written by him. He needs to work on spelling and sentence flow and detail, but it’s a work in progress and as time goes on, I expect his posts to become even better. So, when you read the posts, don’t panic, I haven’t gone off the deep end!