I seriously thought this posted in August. I was wrong. I apologize. Please read this and pretend it’s August.

So last week school started. For N, T has some kind of schoolwork pretty much daily all year. (Ask him how he feels about it. I dare you!) N was able to ride on a big yellow bus to the same school that I attended when I was his age. So far he has seemed to enjoy it, he’s always excited to see the bus and will happily wave and blow kisses when it leaves at the end of the day.

T decided that he wants to study biomes. I had already planned on using the Moving Beyond the Page curriculum for his language arts, science, and some of the social studies. (He wants to learn the states and their capitols, so I have to figure out how to add this in, and his math is Beast Academy.) I realize a lot of this is gibberish if you aren’t in the homeschooling world-I will talk about a game in a second or two. So I decided to add in biomes when and where I could. We went to the local zoo one day and were able to see some different types of habitats. Our local zoo, the Akron Zoo, has a new Africa area for their lions to live in. It just opened in June and was amazing! I really liked how close we were to the female lion.

One of the games we brought home from Gen Con was Echidna Shuffle. I had played a quick version of it in Indy and thought that he would really enjoy it. Thanks to the generousity of Wattsalpoag Games, we were able to have a game to help kick off “Back to School”. I thought perhaps there would be a bit of confusion when playing for the first time. I was wrong. There are cute little echidnas (which we learned are Australian ant eaters) and they follow the arrows on the board, going from leaf to leaf, trying to be the first to deliver their critters to their tree stumps.

The game starts with the echidnas randomly placed all over the board, the players marking where they will pick up their critter cargo and the stumps are placed on the board by another player (in our case, the opponent.) Once this has happened, the players take turns rolling the die and moving any of the echidnas to the next empty leaf, following the arrows along the path. After a player picks up his cargo, he then moves along the path and drops it off at one of his tree stumps. The first player to get his critters delivered to his stumps is the winner. 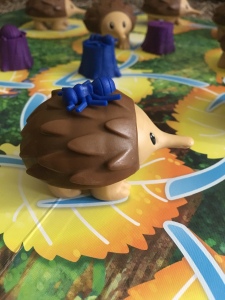 This game has quickly become a favorite of T. He has asked to play several times daily! I can’t blame him, it’s fairly a quick play, the echidnas are super cute and the critters and the stumps are so colorful and fun! We also like that there are two different playing board scenes on each side of the board: a snow scene and the leaf scene. The snow scene is a bit harder, but that hasn’t stopped T. He still tries to win. 🙂

Our school curriculum currently is working on communities. I’m hoping the next game we play can somehow be tied in. Stay tuned!