I knew there would be lots of games to see and play at Origins, but once we were there and saw everything, it was mind blowing! We went down on Friday and again on Sunday so that I could meet with some of publishers. We were able to try out a few games on Friday: Songbirds by Daily Magic Games and Everybody Loves a Parade by Calliope games. We also brought home a bunch of games to try out and review. Those will be coming in the future.

Songbirds was a lot of fun. The job is to end up with the card of the color of bird that is making the most noise. Clear as mud, right? Once we started playing the game, it totally made sense. The game is played in a 5 x 5 grid, with the “loudest” bird in each row or column winning points. (Adding points on cards of the same color in same row/column determine the “loudest” bird.) At the end of the game, each player is left with one card in their hand. If that card matches the loudest bird, they win. 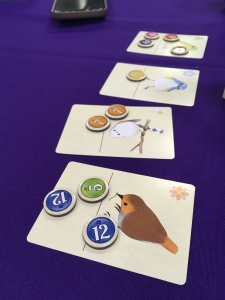 The game was pretty fast and does require some strategy, but T had no problems with it at all. He caught on almost right away. We ended up having the losing bird colors, it it was still a lot of fun. I liked that there was strategic thinking and math involved. He wasn’t thinking that he had to add too numbers together and get a total. He was just trying to get the points. I love games that can get math involved without him knowing. He learns the concepts of math easier and I don’t listen to him complain.

I have many other games to talk about, my mind is just spinning! I am still trying to wrap my head around all of the amazing things we saw over the weekend. I’m pretty sure anyone could find a game topic there that they’d enjoy. I will be posting more in the days to come, stay tuned!